Playful as a Preschooler

“… as big as my teacher,” “as big as a school bus,”  “as big as my house.”  Ask a preschool child how big an elephant is, and these are some responses.   Ask them to show you “as fierce as a lion,” and their little hands clench like claws, their faces grimace and their eyes squint.  Yes, very young children can express themselves using simile.

While simile and metaphor are not seen in the curriculum until 2nd or 3rd grade (appears in the Common Core Standards in 3rd grade), if you talk to children using this language,  they will better understand the literary terms when they are introduced.

March is a great month to introduce simile as it couples with the month and weather theme, “In Like a Lion; Out Like a Lamb.”  I have created a storytelling program that reinforces this simile.
In March in New England we saw days of wild snowstorms, as well as calm days where winter coats were unzipped.  At the beginning of the program, I point out to the children that the snowy, cold, windy days are as wild or fierce as a lion; the calmer days, as gentle as a lamb.   Then I tell two stories that highlight the character of the lion and the lamb.

Mosquito Teaches Lion Good Manners (another folktale to use is The Lion and the Mosquitos) is an African folktale in which I have the children roar along with me every time the lion roars.  When lion meets the elephants around the watering hole, I have the children start thinking in simile with the “how big is an elephant?” prompt.   After the story, I ask the children to think of a lion and tell me what he is like.  They often repeat words used in the story: “he’s strong,”  “he’s fast,” “he roars,”  and add some of their own from describing physical features to, “he’s tough.”  All of this is good feedback.   Then I ask what does the lion’s face look like when he roars?  They answer that he looks mad.  “Another word for mad and tough, is fierce,” I add.   Then I ask them to all show me, “fierce as a lion.” 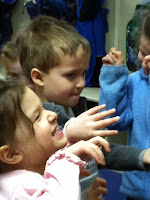 I then tell a French folktale about “Mouton, the Sheep and El Gato, the Cat.”  (It is interesting that most versions have the cat’s name in Spanish, making me suspect that the tale originated in the south of France.)  In this story, the sheep is a “scaredy-cat:” she doesn’t like to go out into the woods surrounding the house and is frightened in a most silly way, when the wolf comes knocking at the door.

After the second tale, I ask the children to stand up.  They then re-enact “fierce as a lion,” because they love playacting ferociousness.  Then we erase the lion from our faces and I ask them to look as sweet and gentle as a lamb.   Perfect little smiles appear and often their hands are grasped under their chin in an almost prayer like manner.

Not so coincidentally, the children are now calmed down at the end of storytime and ready to make a transition.